Today it is impossible to imagine a successful ecommerce business which doesn’t use Facebook and Instagram advertising. However, Facebook is famous for being extremely suspicious and banning lots of accounts. In this article, I will tell you why people get banned from Facebook, how you can avoid it and how to appeal a Facebook ban.

A Facebook ban is when you are temporarily or permanently denied access to your personal account or when your business page becomes invisible (unpublished) or permanently deleted. It can happen for a variety of reasons and can have various consequences. In the worst case scenario, you won’t be able to restore the pages by any means.

Facebook and Instagram advertising are a must for any online business including dropshipping stores. From this perspective, Mark Zuckerberg has created something outstanding. But getting blocked on Facebook isn’t just an unpleasant annoyance.

Sometimes, Facebook only imposes restrictions on what you can do for a time. For example, it can ban you from posting for several days. Harsh, but you can live with that. But for more serious violations, it can disable your page permanently.

When you use Facebook advertising as your main source of customers, losing access to the account can kill your business. You can’t post anything, can’t launch, start or even stop advertising campaigns in Ads Manager, can’t respond to other Facebook users (your customers) – can’t do anything.

A lot of people report getting banned from Facebook for no reason. Although Facebook’s AI does make mistakes, there’s always a cause. Facebook even provides users with Terms and Policies explaining why their accounts may get banned. However, it’s often difficult to tell which rule you violated.

Most of the problems arise from the fact that it’s Facebook’s AI that blocks accounts. After it happens, one can file an appeal, and that’s when you get to talk to real people. But until then, every activity on Facebook is monitored by a computer whose algorithms are very formal.

How long a Facebook ban can last depends on what you violated and how often. For repeat offenses, the block can last up to 30 days. But it’s not the worst part. In certain circumstances, an account can be banned permanently with no way to unblock it.

AliDropship’s team is well familiar with the problem. That’s why we’ve decided to share our own thoughts with customers.

You probably already know the most common reasons why Facebook can suspend a page like hate speech, threats, spam and so on. But here are some less common actions that’ll get you blocked on Facebook for sure.

Having one or two people whom Facebook considers suspicious among your friends is Ok, just like following one or two suspicious groups. But if the platform’s AI finds too many, it can think that you’re going to use the account for something prohibited.

So, treat your personal Facebook page just like a regular user who wants nothing to do with shady characters or groups.

2. Perform too much or too little activity

Even careful people with business accounts get banned from Facebook. Sometimes it happens by mistake; sometimes the real reason remains unclear. In any case, make sure you’re not the only one with access to Ads Manager. Otherwise, if you get blocked, you won’t be able to stop advertising campaigns, so your money will go to waste. Give access to a relative or a friend you can trust.

Facebook groups are created not only by media companies, but by businesses as well. Although one can advertise standalone products on Facebook with just a personal page and Ads Manager, it’s a good idea to also create a page for your dropshipping store.

It’ll let you build a community around the brand and the niche it occupies. After all, Facebook is visited by 2.6 billion users every month.

But Facebook can block a group page as well. Here’s how you can make it happen.

This is one of the less obvious ways to get banned on Facebook. Whenever you dislike someone’s opinion, you can either delete or hide a comment. While hiding them is considered Ok, when you delete comments, Facebook thinks you’re trying to hide the truth from your customers.

Simply hiding comments seems like a good solution. But it won’t last long. If a business ignores complaints, its reputation suffers, and Facebook can decide that it doesn’t want disreputable retailers. So, make sure to do your best to satisfy angry customers.

3. Make someone who broke Facebook rules the admin of the store

Allowing someone who broke Facebook policies before to become the admin of your store’s page won’t necessarily get it banned. But it’ll negatively affect its statistics.

4. When creating ads, use pictures different from actual products

And not just pictures. Any kind of mismatch between an ad and the actual product it advertises can lead to getting blocked on Facebook. This is how the platform punishes businesses that try to misinform clients. If you want to get banned from Facebook, go ahead and lie about the price, the colors, models, etc.

5. Use automation tools too much

Probably all social media hate auto-posting and bots. First of all, when somebody uses a bot to create a Facebook page, it is probably because this person is trying to hide his or her identity. Second, if an account is managed by a bot, it can start publishing dozens of posts with spam content, which nobody wants.

As a result, when one uses such tools too much (not only to auto-post but to follow and like other users as well), Facebook can ban the page.

Any kind of policy violation often results in Facebook suspending your personal page. In this case, when trying to login, you will find the following message.

You need to send them a photo of yourself or your ID to confirm that the account wasn’t stolen. After that, all you can do is wait.

Checking the personal information can take several days. After that, you will be either asked for more proofs or allowed to login.

In this case, you can appeal the ban by clicking on the “Go to Help Center”. On that page, click on “Let us know”.

And again, you’ll be asked to upload a photo of yourself or your ID with more detailed information, after which you’ll have to wait.

If a policy violation comes from your business page, it’ll be unpublished by Facebook, i.e. nobody except you will be able to see it on the platform. Sometimes the warning looks like this: 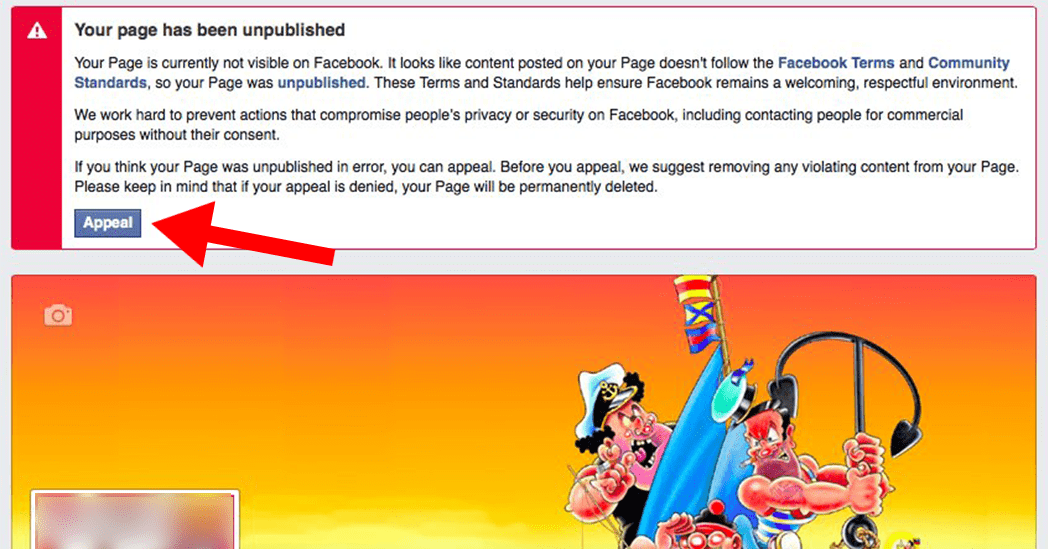 To make it visible again, you can try filing an appeal. Click on “Disagree with the decision” or “Appeal” (depending on what message you received). Then wait for Facebook’s final decision.

If you don’t have time to wait or Facebook has deleted the page permanently, you can recreate the page by making an exact copy of the previous one. However, you should take into account the mistakes you made to prevent similar situations in future.

All the experience AliDropship’s team gains from managing our own shops helps us minimize the risk of getting banned from Facebook. It is also used to create Established Stores – unique dropshipping websites which have the most profitable products and active social media accounts. By purchasing one of them, you become a sole owner of an already working business!

Scroll back to top