Hi! Came around to find out if Facebook is dying? It’s an important thing to keep an eye on because you know, nothing lasts forever! So, is it already the time to start worrying? The short answer is ‘not yet’ – and for a longer and more detailed one, keep reading!

Facebook is one of the largest and most popular social networks that everyone (including you) uses at the moment to promote their businesses. And a shift in its popularity can’t go unnoticed as all the marketers will have to opt for some new places to advertise and rush to explore new promotional strategies. Is it happening already? Let’s see!

Well, at first glance, everything goes fine: it was reported that Facebook added almost 300 million more active users over the course of 2020, and got a “better than expected” revenue of $28.07 billion – while the estimates analysts suggested were $26.44 billion. 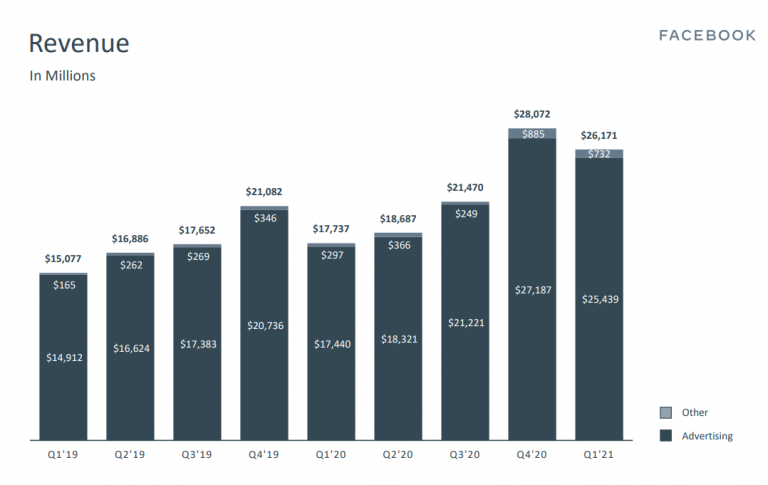 But when you look deeper, you start noticing signs indicating that as a social network, Facebook is… well, not dying, as such, but already going slightly beyond its maturity stage. Definitely, this doesn’t pose a terminal concern at the moment. Rather, it means that you need to take the situation seriously and get ready to adjust your advertising processes in some far, but foreseeable future.

So, what are the signs you should pay close attention to?

It’s the regular people (over 1.85 billion daily active users!) that make this biggest network happen. We chat, share news, publish posts, and without us, this network would go extinct.

And if you take a look at the data Facebook shared in the FB Earnings Presentation Q1 2021, you’ll see it clearly indicates signs of user fatigue on some regional markets.

Overall, the chart looks great and the trend goes upwards. But when broken out into regions, the figures show that in the United States and Canada, the number of daily active users dropped from 196 million in the third quarter to 195 million in the fourth quarter of 2020 and first quarter of 2021.

So what, you say? Well, North America is historically Facebook’s oldest market – which could mean it establishes a pattern for what we all can expect in other regions.  Some further statistics throughout this article will be given through the US prisma as well – because, according to our experience, the US market is the most economically promising when it comes to dropshipping.

And why would you need to care that people are leaving Facebook? Simple math: with less people using Facebook, less people see your ads and buy your products!

So, who leaves Facebook and what are the reasons?

The abundance of news, updates from all the people you’ve ever met in your life and all those small pieces of information around us gets really challenging. In fact, we don’t need that much! So, sometimes it’s a blessing not to know what your neighbor had for lunch or where your high school mate went for the weekend.

We all want to see news or read posts only dedicated to things we care about. So, as browsing through tons of useless information in your news feed might be tiring, people just leave.

Turns out, an average Joe spends about 33 minutes per day on Facebook.

Not everybody spends this time on FB working or staying in touch with friends, you know. There’s always some meaningless scrolling through your feed – while there are so many things to do these days instead of staring into the phone!

The recent massive leak of 533 million Facebook users’ data has shown that making your phone number, full name, location, birthday, bio and email address available to everyone on the internet isn’t that much of a good idea… There were more data leaks over the years, and people started to lose their trust in a secure protection of their personal data.

According to this research findings, Facebook spreads fake news way faster than other social sites. So, not everyone is ready to dedicate their time to read through and filter out all that junk information.

Have you ever heard of the social comparison theory? In short, you evaluate yourself and measure your personal development by comparing and contrasting yourself to the peers. Yes, for some, it’s a friendly competition that motivates us to improve, gain new skills, and reach some achievements in life. But for some, social comparison can be detrimental to their self-esteem and well-being.

In other words, and talking about Facebook, when you see in the news feed that your acquaintance got married, got their dream job, got a medal, whatever, you might experience FOMO (fear of missing out) and a spectrum of negative emotions about yourself – while you shouldn’t at all. Because things in life are much harder than people allow themselves to show on Facebook.

So, as you see, our mood and even the way we feel about ourselves can be greatly influenced by what we see in the news feed.

It’s so easy to tell nasty things to a person when you’re, actually, not in front of them. So, haters gonna hate in the comments, and those who don’t want to see it or even experience it, prefer to start using other social media that seem more friendly or just use messengers only.

Do you like the lockdown? Neither do we! So, when you’re caged up within four walls, you start appreciating getting physical (in a good way😁) with people – e.g. go to a restaurant or take long walks in some beautiful places. So, people are expected to go out more and build up real relationships instead of media-mediated connections with people you hardly saw in the past 10 years.

Plus, people found out that in order to share a funny picture of their cat with friends, they can just privately send it via messenger instead of posting it on Facebook.

Teenagers moved on to using other social media, and Facebook is no longer perceived as a social platform for younger generations.

Why don’t teenagers want to use Facebook? The answer is simple – online bullying, hate speech, tons of ads, and the fact that Facebook is just not fun anymore.

In addition, they don’t want to be on the same social networks as their moms, dads and older relatives.

But why do you need to care, especially if teenagers are not even your target audience?

Don’t rush to dismiss them – teenagers might not be your prospective customers at the moment, but they will be in several years. So, in the long term, your dropshipping store will lack young (and very good at impulse buying) customers if you’re going to promote it only through Facebook.

#3 Cooler networks are coming along 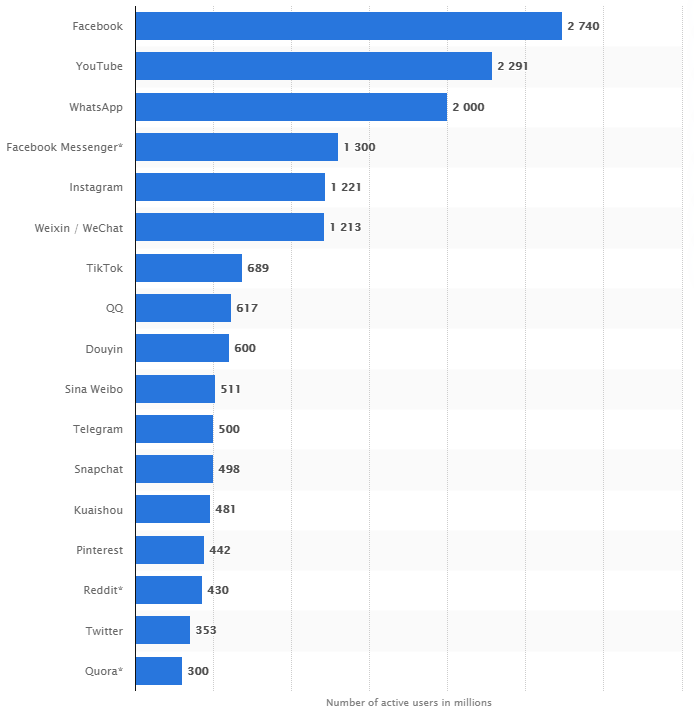 …people start spending more time on TikTok than on Facebook! 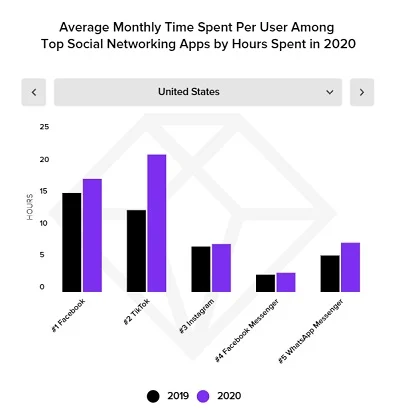 Debra Aho Williamson, eMarketer analyst, says: “Users in the US and Canada are starting to move their social time and engagement elsewhere. <…> One logical destination is TikTok, which has grown rapidly in 2020 and has some of the strongest user engagement, in terms of time spent, among all the social platforms we follow.”

Well, TikTok’s success is predictable – short videos allow consuming tons of entertaining content in a short time, and diverse types of videos can suit any taste. Plus, the generation of high pace and video content definitely likes TikTok more than Facebook.

Besides usual users, TikTok can become even a better platform than Facebook for advertisers as well – according to this experiment and, again, because of TikTok’s growing audience and popularity.

Apart from TikTok, there are many apps and online platforms that people in the USA use and can eventually find more exciting than Facebook over time. Just take a look at the table below: 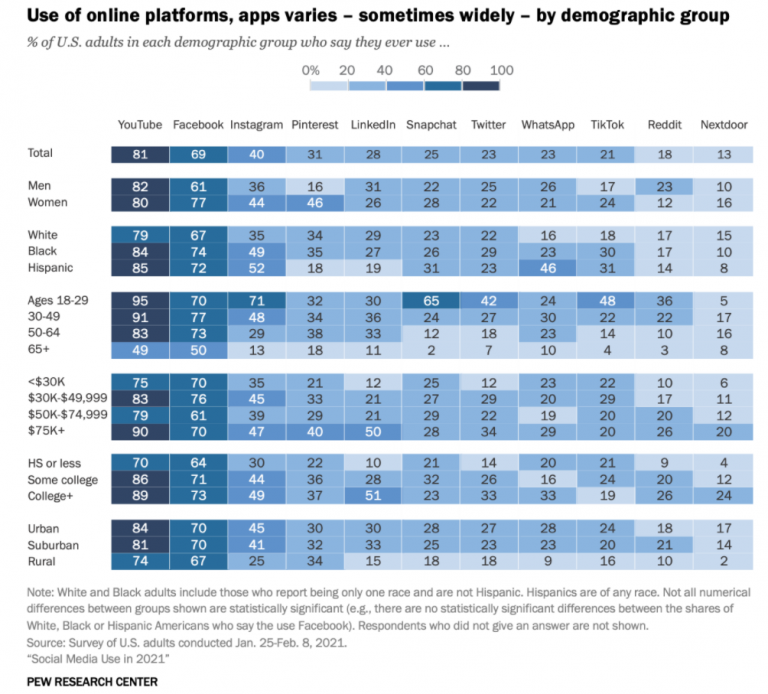 This point is probably not about Facebook as a social network, but about Facebook as an advertising platform. There are numerous reasons why marketers don’t want to advertise on Facebook, from frequent account bans to tricky software updates. This way, the more of them decide in favor of other promotional platforms, the closer Facebook is to losing its significance.

Considering all the data, is Facebook dying, so to say – and what can you do about it?

Long story short, if you ask us if Facebook is dying, the quickest answer is ‘not yet’.

Still, we want to encourage you to take action and start exploring other social media platforms where you can advertise your dropshipping business as well.

Just look at this universe: there’s plenty of… space!😏

What are the key takeaways?

First of all, we wouldn’t like you to perceive this article as an urgent call to “pack your things and go” – go away from Facebook. This giant will not crush overnight and it will stay with us for a long time for sure.

We’d just like you to notice the signs that clearly indicate that Facebook will not last forever and be ready to face it some day. Is Facebook dying? Not quite, as for now – but nevertheless, you should start researching, exploring and testing new business-friendly promotional platforms as well.

So, as for now, keep advertising your dropshipping store on Facebook as usual: keep your official store account busy, make cool posts, run ads… Our advice is to stay curious about new promotional methods and advertising platforms – and some day, get to thinking about a backup plan with Facebook off the table. Happy dropshipping! 🙂