To advertise effectively, one has to take into account multiple factors. However, the problem is you still can’t be 100% sure about how your campaigns work. For such situations, digital marketers use A/B tests. In this article, we will talk about how to do split testing on Facebook.

What is split testing?

Split testing, or A/B testing, is a marketing research method based on comparing two or more versions of the same element in order to find the most efficient one. It is used to test any kind of variation (ad copies, banner placement, video thumbnails and so on) while all other elements of these objects remain the same. Internet traffic is split between the objects equally so that after a while, marketers could see which of these versions perform better.

For example, if I’m not sure which of two headings will bring me more sales, I can test both these options. After a week or two, the test will show that the A variation generates 10% more sales than the B. Now I know what to choose.

Sometimes you need to compare more than two variations. While it is possible to make an A/B test for three or even four options, it’ll take more time: you’ll need to direct enough traffic to each of the options, so the more variations you test the more traffic portions you need.

Another thing to remember is that split testing is used to compare objects that are totally identical to each other except for a single element. Otherwise, the results can be unreliable.

We have already mentioned the importance of testing your marketing materials, strategies or audiences. This time we will talk about how you can use split testing on Facebook.

There are several ways you can launch an A/B test on Facebook.

The first method allows users to compare Facebook advertising campaigns to each other. Keep in mind this: whether you want to test particular ads or ad sets, it’ll compare them on the campaign level. We’ll get to it a bit later.

To start, go to your Ads Manager and create a new campaign.

After choosing a type of campaign, Facebook will ask you to customize the settings. One of the fields there is named “A/B Test”. This is what you need. Simply click on the “Get Started” button and continue customizing the campaign structure.

This campaign will become your “original” campaign, or the first of the two variations you want to compare.

After you click on “Publish”, Facebook will show another box called “Create A/B Test”. Continuing will let you create another campaign for comparison, or the second variation.

In the “Variable” field, you can select what exactly you want to compare. Facebook will make a new campaign identical to the original one except for this particular detail. Your options are:

After choosing the variable type, click on “Next”. It’ll take you to another page where you will see two versions of your original campaign which you are going to test.

Here you’ll have to pick this variation. In my example, it is an alternative ad image. After that customize the rest of the settings. Pay attention to the daily budget settings: this sum will be split by Facebook between the two versions equally.

Another important field here is “Key Metrics”. By choosing one from the list, you tell Facebook which ecommerce metric to use when deciding the winner such as the cost per conversion, cost per link click, etc. For example, “Cost per Purchase” will probably be the best option for conversion campaigns aimed at converting users into buyers.

As for the “Estimated Test Power” index, don’t take this information too seriously as Facebook’s estimations are pretty vague.

After that, click on “Create Test”. Facebook will create three campaigns that you can see in your Ads Manager, two of which will be scheduled for split testing.

Another way to launch an A/B test on Facebook is to tick a box near a desired ad, ad set or campaign and click on “A/B Test” on the panel.

This method will also create a split test on a campaign level just like the method I have described above.

As I mentioned before, although you can choose variables for comparison, Facebook will actually test campaigns. If you want to compare standalone ad sets or ad variations within one Facebook ad campaign, you’ll have to use another method.

In order to run A/B tests on Facebook for ads and ad sets, you need to have an existing campaign. Pick an ad or an ad set and click on “Duplicate” under its name.

In a new box, click on the “Create a test…” button under “Original campaign”. Unlike the previous method, this one will create a copy of the existing ad or ad set within an existing campaign, so you will end up with just two test subjects. The original becomes the test A and the copy becomes the test B. 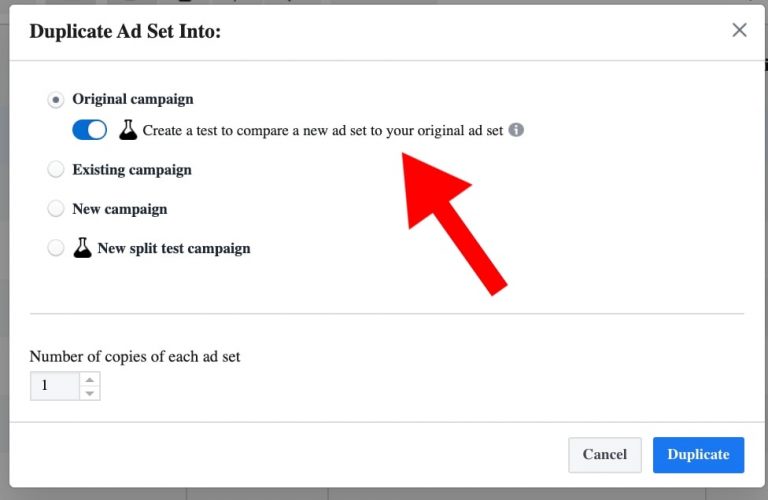 In the new box, you can edit the copy, thus making different variables. Although you can make a completely different ad, marketers usually change only one parameter. Also, pay attention to the budget section.

The “Daily Budget” line shows how much money you wanted to spend on the initial ad or ad set. The “Original” and “Copy” lines indicate how this sum will be split between the newly created test subjects. Make sure it’s split equally.

After finishing with the settings, click on “Publish”. Now you can see these two ads or ad sets in your Ads Manager being scheduled for testing. This is how you can test Facebook ads and ad sets without creating a new campaign for each variation.

There’s yet another way to launch a split test on Facebook from the Experiments section.

However, this method lets you compare either ad sets, campaigns or campaign groups, which will be hardly useful for small businesses like dropshipping.

Split testing on Facebook lets you analyze your marketing materials, targeted audiences, ad placements and other nuances. By using this information, you can pick the best performing ads and substantially improve your dropshipping business.